Steve Brazill, but I go by Razz on the radio.

Of the cameras I own, the Canon 5D mark IV, but I would love to own a Canon 1Dx mark II.

I have typed and then deleted this answer 5 times…. this is tough…. any Led Zeppelin, or maybe AC/DC Back in Black, or Rage Against the Machine, Blink-182, Journey…. I almost forgot Green Day’s Bullet in a Bible… the list goes on. There are so many great records out there, but if I had to pick one I would say Led Zeppelin II.

If you could have dinner with one person from music history, alive or dead, who would it be? Why?

John Lennon – The conversation could go so many ways, politics, music, The Beatles, family…. this would need to be a long dinner.

1. Don’t hold your camera over your head in the front of the pit, move behind everyone first, or better yet to the sides. Then take a shot and stop. Everyone has done it, but don’t affect other photographer’s shots, or the audience’s enjoyment of the show. The best option is don’t do it at all.

2. Do not post obviously unflattering images of the artist, ever. If you are shooting an artist you don’t respect enough to care about their feelings then go shoot some other show. Of course what is “flattering” may be tough to judge with some artists. There are guitarists that love crazy “guitar face” images of themselves, but there are others that are self-conscious about something… their weight, their height, something. Some singers walk around overweight with no shirt on, knowing they will be in a photo, but others may not think about the difference between the audience watching a moment unfold in real-time vs that moment or pose frozen in time. So yeah, you may honestly think it’s a great shot, but take a moment to think about the artist’s style, public image, and persona, and decide if the “great” shot is respectful of that artist. You won’t always be right, but at least try.

3. Be a good human. That covers so many things. Don’t be rude to other photographers in the pit, they have as much right to be there as you do (even if you think their gear is less than what you think it should be. They got approval from someone above your pay grade). Respect the security staff, their job can be way harder, and arguably more important than what we do. Respect the audience, and the artist they paid to see. In other words, don’t be a dick.

I have said this so many times, I’ve even written blog posts about it, and it is still the number one tip…. ignore the noise. No one is looking at your images zoomed to 100% in Lightroom. Most of the time you are exporting low res images for social media. Most of that noise is tossed away with the other pixels when you go from 5000px to 2000px, and a little noise reduction goes a long way to solve what is there. Stop turning everyone into plastic looking people. A friend of mine, Rick Sammon, told me a story of his dad commenting on noise once. It was something to the effect of “If a picture is so boring that you notice the noise, it’s a boring picture”. In other words, if people notice the noise in your image then there is most likely something else wrong with it. Go look at some of the most iconic photographs of all time, like Muhammad Ali standing over Sonny Liston, or almost any iconic music image from the 60’s or 70’s. Those photos are full of noise and no one cares. Raise the ISO as much as needed to get the shutter speed you need to properly capture the subject you are shooting. My rule is simple, a sharp noisy shot is always preferable to a clean blurry one.

I showed up with a Canon 7D and a 70-200 to photograph Van Halen at an arena only to find out after getting there that it was a soundboard shoot. A photographer I’d never met, his name is Paul Hebert, lent me his 1.4 teleconverter, and that plus the 1.6 crop of the 7D made it so I could get usable shots. We have been friends ever since.

I believe that we remember the most important moments of our lives by the song that was playing or the music that was popular, at the time. I grew up seeing images from the legends in music photography – images of Queen, Led Zep, The Who, KISS, Bowie, Woodstock, the original Cal Jam etc. That music and those amazing images shaped my love of music and contributed to my career. Having been in radio my entire adult life, once I got into photography merging these two worlds was a logical step.

My dreams have already come true. I have an amazing wife and son, I have been privileged to be on the radio for almost 40 years, I’ve got my podcast, I get to be at concerts often – either as an emcee or a photographer, and I get to meet amazing people through my job(s). It’s a pretty good life. That said, I would love to do more voice-overs and on-camera work – if anyone has a movie they want me to be in.

Behind the Shot Podcast: behindtheshot.tv

Listen to our interview about Music Contracts and Photo Pit Etiquette here: 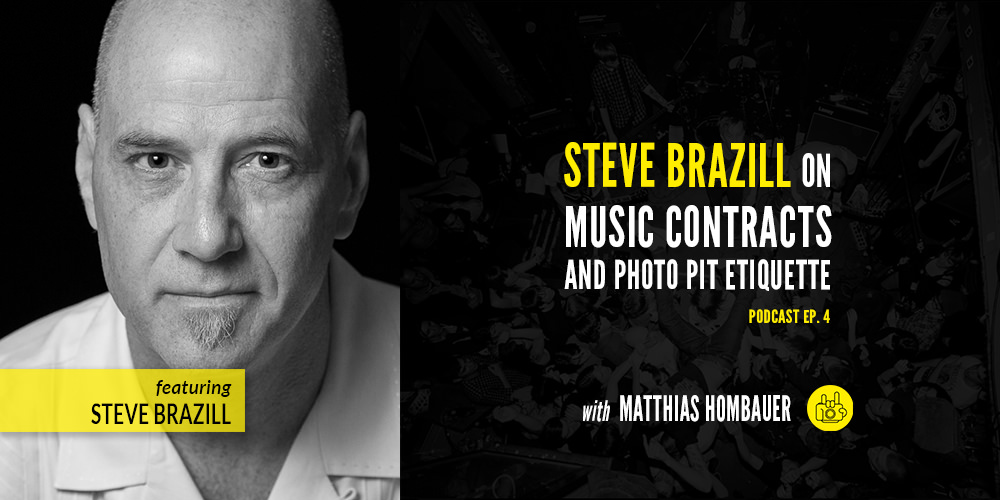