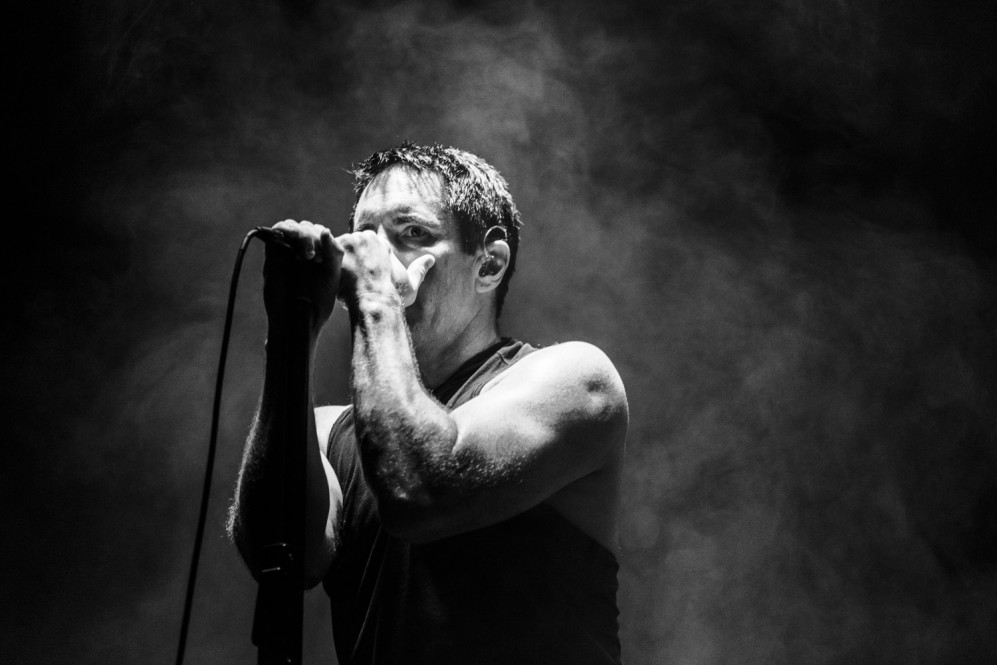 Have you ever been frustrated by how your photos turn out after shooting a concert in low-light situations? Most of the time, you have to fight with red/blue/green spotlights making your life difficult. In this blog post, I want to focus on this problem, but also on the solution which is Black & White Photography. I´ll also offer my favorite Black and White Lightroom Presets as a free download to help you to get awesome concert photos, even in small clubs.

The Problem: The Red/Blue/Green Monster

I would say that concert photography is one of the most challenging fields in photography. You´ll work in dark venues, you won’t be able to use flash and you’re dependent on the mood of the light technician. In general, you´ll never know the next move of the artist on stage and there is absolutely no way to direct them. However, the most prominent problem that we have to deal as concert photographers is the light situation.

The main problem you often face as a concert photographer is the lighting on stage. If you are already a gig photographer, you´ll have noticed that sometimes the stage is filled with only red, blue and green spotlights. This depends on the club’s lighting equipment and, in general, I would say the smaller the venue the poorer the lighting equipment. However, it’s also happened to me quite often that bands just don´t want to have the lights on onstage or the light technician appears to be sleeping. This super low light situation gives our camera equipment a hard time both when trying to focus correctly and getting enough light to hit the camera sensor.

To read my suggestions for the right camera equipment for starters on a budget click here.

Furthermore, you´ll discover that the musicians on the back of your LCD display will look like creatures from outer space. Yes, I love the similarly named song by The Prodigy, but I definitely don´t want my photos looking like that! You can argue that the artist might want to have their concert pictures colored red and as an observer we have to capture the “real world situation” with our camera. This is all fine and if you like the look, move on. But besides this philosophical question, red lighting gives our camera sensor a very hard time. A digital image is comprised of three channels: red, green, and blue (RGB). If you shoot in “red light” conditions, you´ll get an excess of light in the red channel which will result in loss of detail in your photos.

I even know of some concert photographers who decline to shoot a concert which is lit with red spotlights. Recently, I took concert photos of King Buzzo of the Melvins. He did a solo performance and as the show started, the stage was flooded with four red spotlights. After taking some photos in front of the stage, I went back to the light technician and asked if the light was going to change or if the red spots would stay on for the whole show. “Nope, it’s not going to change, just red light”, was his answer. Next day, I talked to the promoter of the concert and he explained that King Buzzo just wanted to have his stage lit with one color. Unfortunately, the light technician decided to turn on the red spotlights. So, sometimes as a concert photographer you have to deal with these situations, but as I don´t really like the look of green, red and pink people I’ve had to figure out how to make them look awesome again!

Personally, I think there’s only one solution to overcome the problem described above and that’s using the beauty of Black and White Photography. To get the best from your photos taken under challenging stage lighting conditions, make sure you follow the next 2 suggestions.

I am a RAW shooter, as it gives you the most flexibility when post-processing your concert pictures. If you shoot in JPEG, the internal camera processor will apply adjustments such as saturation, contrast, sharpness and more to your pictures but this won´t help you much in your situation. Furthermore, you’re limited by using JPEG files in your post-production workflow ( i only suggest to use JPEG when you shoot your first concert and you don´t know how to process RAW data). When shooting in the RAW format, you can change any parameter you can dream of in a dedicated program such as Adobe Lightroom. If you are new to post-processing, I would suggest taking a look at some workshops on the internet. I can guarantee you that every professional-looking concert picture you´ll ever see was manipulated in some way or other. Adobe Lightroom seems to be the best choice since it´s rather intuitive and works great when dealing with large amounts of pictures.

2. Use The Power Of Black And White Photography!

Here comes the magic! Until now we’ve captured RAW photos of red, green and blue musicians on stage. Here’s how to make them shine: Convert them into Black & White! I think this is the single most important lesson I learnt when I started out! Have you ever wondered why so many concert photos are published in Black & White? Bingo! Not only do you get rid of the awful color cast but also the grain which you might see because of your high ISO setting is much less distracting. I really love how “creepy” photos turn into “raw (no pun intended!), sweaty and sexy” looking masterpieces.

The easiest way to use Black & White Photography is to remove the saturation from your photo. In Adobe Lightroom there’s a saturation slider you can drag to -100 (for beginners). It might take some practice to understand all the sliders and settings in Adobe Lightroom, but removing the saturation will already will give you a good starting point to play further with. So convert your photos into Black & White and make your musicians look awesome again! As I want you to get started as soon as possible, you can get my Black and White Photography Rockstar Lightroom Presets here.

Try to avoid over-exposing your concert photos. When using RAW format you will be able to rescue some of the highlights, but your options are limited. Furthermore, over-exposed concert photos will give you a hard time when post-processing using Black & White Photography settings in your chosen photography application.

There are other options like using a flash or using filters. However, in general you are not allowed to use flash in the photopit and using filters (e.g. blue filter) will cut another 1/3 – 1 full stop of light.

Summary of Black and White Photography:

Since I know a lot of concert photographers struggle with the bad lighting situations at concerts, I decided to develop my own Black & White Photography Rockstar presets for Adobe Lightroom (Version 4 and above, Win and Mac. It even includes an instruction on how to install my presets if you´re new to Adobe Lightroom).

I like a contrasty look and all of the concert photos posted here were developed with just one click using my own presets.

My Black and White Photography Rockstar presets will include the 3 following presets:

All 3 basic presets are used by myself for post processing my own concert photos. Why do i not have 365 different presets? I don´t need more, because all 3 work on multiple lighting conditions for “raw and sexy” black and white concert images.

What people are saying:

“I had the chance to test Matthias Hombauers’ Lightroom presets on a variety of concert shots (good light, of course bad light, daylight, LED, etc.) and at least one of his presets always brought me to a point where only a few individual tweaks (if any) were needed to finish editing the shot.” – Rolf Riot, Music Photographer, Switzerland

“I’ve been using these presets now for a little while and they are simple outstanding! Not only have they helped to speed up my post processing workflow, but they will help turn your photos into beautiful black and white images. Easily the best way to help combat the harsh lighting conditions every concert photographer encounters on a regular basis.” – Mat Allan, Music Photographer, Australia

Download my free Black and White Lightroom Presets and use them for your own pictures. Post your favorite Black and White Concert Photo in the comment section below and tell me which LR preset you like the most.

Click the yellow button below to get my Black and White Lightroom Presets.